My wife has a company specialising in professional family history research, called Genealogy.ie. Her enthusiasm for the topic was contagious, and I have for several years been researching my own.

“Van” means “from” in Dutch. And “Turnhout” is a town in Flanders in  Belgium.  It is located at the bottom of the map shown.

Unfortunately, in my research, I never got further back than the middle of the 18th Century and my ancestors lived in the same region I was born in: Tilburg in The Netherlands, at the top of the map.

But although I have not been able to trace it, I still believe it is a reasonable assumption that the town of Turnhout is where my family originally hails from. Especially because it is only 35 kilometers from Tilburg.

As mentioned, I traced the Van Turnhout ancestry to the middle of the eighteenth Century in the Tilburg region.  Jan van Turnhout got married on 10th May 1749, to Wilhelmina van den Corput. He was from Dongen, a village to the north-west of Tilburg, she was from Rijen, a village south-west of Tilburg.  I did find a birth record for a Jan van Turnhout in Dongen, dated 10th August 1728, but am not sure if this is the same Jan. The newlyweds went to live in Rijen and it is in this village that my ancestors would reside for the next 100+ years. Most of them were land labourers.  This changed when one of my forebears died young, in 1868, aged only 31.  His widow remarried and took her young son Hubertus (born 1866) with her to live in Dongen with her new husband, the same village that Jan had come from over a hundred years earlier. I don’t know what exactly happened, but his experience seems to have spurred the young lad on, as he went on to found a transport company in Dongen. And gave his children an education. One of these children, Laurens, became an accountant. This was my grandfather, who would also live all his live in Dongen. It was my parents who moved to the big city next doors, Tilburg. 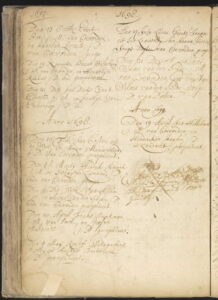 I also researched my maternal family history; the Hazelaar family. This time I managed to get back to the 17th Century, if only just: my 7th great-grandfather, Jan Derks Haselhort got married on 21st November 1697 in “Op het Klooster”.  The family was from a completely different part of The Netherlands,  the Coevorden area in the East of the Netherlands. Also, “Hazelaar” was not the original name of the family; it was “Haselhorst”, a very German name. Coevorden is very close to the German-Dutch border, so this is not entirely surprising. Finding themselves on the Dutch side, they obviously decided to adopt a more Dutch sounding name. Finally, “Op het Klooster” was a hamlet just south of Coevorden, where the family owned a farm.  Much later, after the Second World War, a branch of the family went to live in Canada. The whole family went together. However, one of the children postponed his departure because his wife fell ill. And then he died himself! The widow decided to stay in the Netherlands, with her 3 children. The youngest of which was my mother.

I had a DNA test done via Ancestry. Apart from the Scandinavian genes that virtually everyone in Western Europe seems to have, my DNA is neatly splitting in a Germanic line and an “English and Northwestern Europe” one. The latter is explained because the word “English” is a development of “Anglo-Saxon”. And both the Angles and Saxons were tribes which migrated to Britain from the continent. 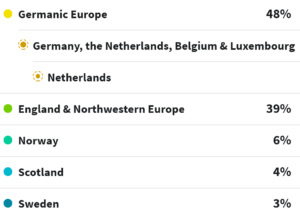 So, it seems that my parents came from two different gene pools, my mother presumably representing the German line and my father the Anglo-Saxon one. 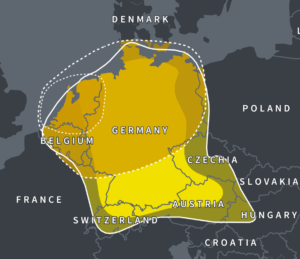 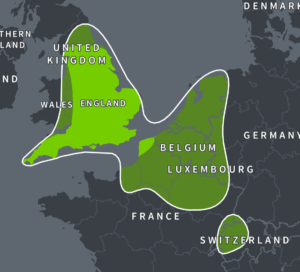