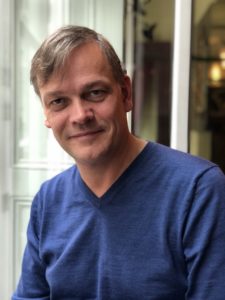 I was born in Tilburg, The Netherlands in 1968. I attained a Masters Degree in Business Economics in 1991. After graduating I was conscripted in the Dutch Army. I opted for a slightly longer conscription period to become a Second Lieutenant in the “S2” section, which dealt with defensive intelligence. Subsequently, I completed a post-graduate Export Management course before starting my first job, in the marketing department of a professional catering equipment company.

My wife, Jillian, is from Ireland. In the early nineties, she worked in Brussels for a few years. We met at a birthday party of a mutual friend, who also lived in the Belgian capital. For a few years, I spend almost every weekend driving between there and Tilburg, where I still lived. When she finished her contract, she wanted to return to her native Ireland. I decided to join her. This was in 1996. We were married in 1997.

As you have been able to read above, since 2009 I have been developing my skills as a card payment specialist. I also support Jillian in the running of her businesses (a governance consultancy and a professional family history research company) in the areas of finance, social media, and websites.

Privately, I have immersed myself in Irish life and got involved in several voluntary organisations. I am an active member of a political party, current Chairman of my local resident’s association and am contributing to a local history society. You can read more about my activities by following the links below.

I also enjoy reading, travelling, tending to my garden and writing. Examples of the latter are: